Olaf Scholz, German chancellor, is preparing to launch a fresh attempt to deter Vladimir Putin from further invading Ukraine, as US officials warned Russia was on the brink of launching a major attack on its western neighbour.

His preparations came as western nations continued to withdraw diplomatic and military personnel from Ukraine and some airlines cancelled flights to the country. Some European countries are preparing to receive a flood of refugees in the event of military action.

Scholz will travel to Kyiv on Monday before arriving in Moscow on Tuesday. The German leader is expected to urge Putin to de-escalate the situation on the Ukraine border, a senior government official said. He would also convey “how grave the consequences of an attack would be” in terms of sanctions on Russia, and stress “that one should not underestimate the unity of the EU, US and UK”.

Scholz’s aides say he has not given up hope that diplomacy can avert a war, although they are playing down expectations of a breakthrough. “I don’t assume that we’ll come out of this with some kind of concrete result,” said the official. But he insisted that “now is not the time for resignation”. The big goal for Scholz was, he said, to “get a better understanding of Russia’s goals, and to try to figure out if there are any ways back to direct dialogue”.

Meanwhile US president Joe Biden spoke to his Ukrainian counterpart Volodymyr Zelensky on Sunday, with the White House saying the president had made clear the US would respond to Russian military action “swiftly and aggressively”.

“The two leaders agreed on the importance of continuing to pursue diplomacy and deterrence in response to Russia’s military build-up on Ukraine’s borders,” US officials said in a statement. Zelensky late on Sunday said they discussed “security, economy, existing risks, sanctions and Russian aggression”.

The Ukrainian president during the call with Biden asked him to visit Kyiv soon in a show of solidarity. “I am convinced that your arrival in Kyiv in the coming days, which are crucial for stabilising the situation, will be a powerful signal and contribute to de-escalation,” Zelensky said.

Biden spoke to Putin for over an hour on Saturday, but failed to change the Kremlin’s position, the White House said. US intelligence assessments estimate that Russia could launch a full-scale invasion in the coming days. Though the White House believes Putin has not made a final decision on whether to invade, Russia has built up more than 130,000 troops along its border with Ukraine and in neighbouring Belarus, as well as weaponry that could be used for an assault on Kyiv.

Jake Sullivan, the US national security adviser, told CNN on Sunday that an invasion could begin “any day now”, including” this coming week before the end of the Olympics”.

He added: “Russia could choose the diplomatic path. But the way they have built up their forces, the way they have manoeuvred things in place, makes it a distinct possibility that there will be major military action very soon.”

According to the German official, the talks with Putin were designed to explore the opportunities for “direct dialogue” between Russia and the west, and seek to make progress on implementing the Minsk agreement, aimed at resolving the conflict in the east Ukrainian regions of Donetsk and Luhansk, parts of which are controlled by Russia-backed separatists.

Given Russia’s failure to respond to requests to explain its military build-up, Ukraine’s foreign minister Dmytro Kuleba tweeted on Sunday evening that Kyiv would request a meeting with Moscow and other signatories to the Vienna Document — a European security agreement — within 48 hours.

On Sunday, the UK and the US said they were withdrawing their citizens from the monitoring mission of the Organization for Security and Co-operation in Europe. Russian foreign ministry spokeswoman Maria Zakharova called on the OSCE to avoid being “manipulated” and “dragged into sordid political games”. 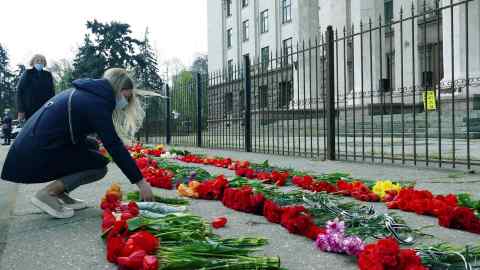 Germany’s Lufthansa said it was considering a “suspension of air traffic”. Dutch airline KLM said it was cancelling Ukraine flights and would avoid the country’s airspace. Low-cost carrier Wizz Air said that it was monitoring the situation. Ryanair, which also operates flights to Ukraine, declined to comment.

Israel said its national carrier El Al would lay on additional flights to bring home its 15,000 citizens in Ukraine.

Mykhailo Podolyak, an adviser at Zelensky’s office, told the Financial Times the airlines’ actions were “nonsense” that “resembles a kind of partial blockade”.

Ukraine’s government on Sunday evening approved a “guarantee” fund of more than $600mn to cover insurance issues and ensure continued airline flights to and from the country after foreign insurers started this weekend stopping flights citing security risks.

Countries neighbouring Ukraine have been preparing to receive refugees in the event of a full-scale Russian invasion. The European Commission has said it is working on the issue of potential refugee flows. Washington has predicted up to 5mn people could cross Ukraine’s western border.