Boris Johnson has announced measures designed to contain the spread of the new Omicron coronavirus variant, as the UK’s chief medical officer warned there was a reasonable chance of “vaccine escape”.

The UK’s measures follow further signs the variant is entering Europe and came as governments around the world tightened travel restrictions. Israel banned foreign visitors for two weeks while Australia confirmed it had detected two cases and introduced new travel curbs. Other Asia-Pacific countries warned they would have to reconsider easing measures.

In the UK, anyone entering the country will be required to take a PCR test within two days of their arrival and must self isolate until they receive a negative result, after the UK reported its first cases of the new variant.

Any contact of a suspected case of Omicron must isolate for 10 days, regardless of their vaccination status. Face masks will be made mandatory in shops and on public transport, but not in pubs and restaurants. All measures will be reviewed in three weeks.

Speaking at a press conference in Downing Street, Professor Chris Whitty said there was “a reasonable chance that at least there will be some degree of vaccine escape with this variant”, the first admission of this kind from a UK health official. This means the variant may be able to evade vaccine protection, but Whitty insisted that it was likely vaccines would still help prevent severe illness and death.

The UK prime minister said: “Our scientists are learning more hour by hour, and it does appear that Omicron spreads very rapidly, and can be spread between people who are double vaccinated.”

Sajid Javid, UK health secretary, said there would be a surge in testing capacity in affected areas and new travel restrictions, which from Sunday will apply to a further four African countries.

The UK health department said one case had been identified in Chelmsford and a second in Nottingham. They were linked and connected to travel to southern Africa, officials said.

Results of tests to gauge Omicron’s response to vaccines and immune systems were not expected for two to three weeks, scientists and officials said.

The new UK measures were introduced as the variant continued to spread in Europe and scientists raced to assess the new level of risk.

On Friday the World Health Organisation designated Omicron a “variant of concern”, skipping the intermediate “of interest” designation.

Global travel has increasingly been limited since Thursday, with the US, the EU, Switzerland and the UK imposing restrictions on journeys to southern Africa and several other countries where the variant has been detected.

In Europe, Germany, Italy, Belgium and the Czech Republic have identified cases.

Authorities in the Netherlands were investigating whether 61 people who tested positive for Covid-19 after arriving on two flights from South Africa on Friday had contracted the Omicron variant.

They have been placed in seven-day hotel isolation, according to Dutch health authorities.

On Saturday night, the Danish health ministry said it suspected two cases of the Omicron variant in two travellers from South Africa. 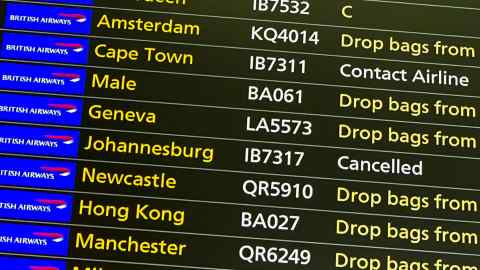 Dr Anthony Fauci, President Joe Biden’s chief medical adviser, warned the Omicron variant could already be in the US, even though there were no confirmed cases. He told the broadcaster NBC earlier on Saturday that the new variant was concerning because it “has a large number of mutations” that potentially made the virus more contagious and more transmissible.

Israel will close its borders to foreigners for two weeks from Monday because of the Omicron variant, according to Reuters news agency. The country has confirmed one case of the variant and has seven suspected cases.

On Sunday, the Australian state of New South Wales confirmed two people had tested positive for the Omicron variant after arriving in Sydney from southern Africa a day earlier.

Singapore’s prime minister Lee Hsien Loong on Sunday warned the country “may be forced to take a few steps back” in its plan to live with Covid-19 as endemic as a result of the new variant. Singapore only relaxed curbs on social activities last week.

“The virus has surprised us over and over again. We have repeatedly had to adapt our response,” Lee said.

India was also reconsidering its planned relaxation of long-standing flight restrictions starting on December 15, due to concerns about the Omicron variant.

Prime Minister Narendra Modi asked government officials to review the plan to ease the travel curbs and called for stepped up monitoring of all international arrivals, with a focus on countries where Omicron had already been detected.